The National Bank of Ethiopia (“NBE”) continues to issue numerous directives with significant implications in the overall financial and monetary transactions of the Country. These regulatory measures are said to alleviate severe foreign currency shortages and control informal money transactions.

Among these, the recent new directives on Payment Instrument Issuers and Payment System Operators, regarded as paving a way for reform in the digital financial sector, are addressed in our previous months’ legal updates (https://bit.ly/3i2uMFv; https://bit.ly/35JZTjO). This legal update will particularly address some of the much recent regulatory reforms by the NBE on the permission of local banks to lend in forex to local borrowers generating forex; the reshuff ling of the forex allocation list and the issuance of new currency notes.

BANKS TO LEND IN FOREIGN EXCHANGE

One of the significant leaps in terms of efforts to alleviate the existing forex crunch is the newly introduced directive that enables Ethiopian banks to intermediate forex denominated loans to local borrowers. This directive, effective as of August 18, 2020, has relaxed the stringent regulation of external indebtedness by NBE.

The directive allows banks to borrow in forex from foreign lenders and extend such credit to local borrowers engaged in forex generating activities as well as collecting the repayment of the debt in forex. The new Directive for Foreign Currency Intermediation by Banks (Directive No. SBB/77/2020) allows banks to borrow and extend a loan denominated in US Dollars, Pound Sterling, Euro, Chinese yuan, Canadian Dollars and Japanese Yen to local entities, such as exporters, who generate forex. The banks may also choose to deposit the fund acquired through external lending at NBE or a foreign correspondent bank.

While banks are exempt from a separate approval process from NBE for undertaking the foreign loan intermediation, the directive puts stringent requirements on the banks before it can borrow from external sources or lend back in Forex to local entities. These are some of the requirements are as below: 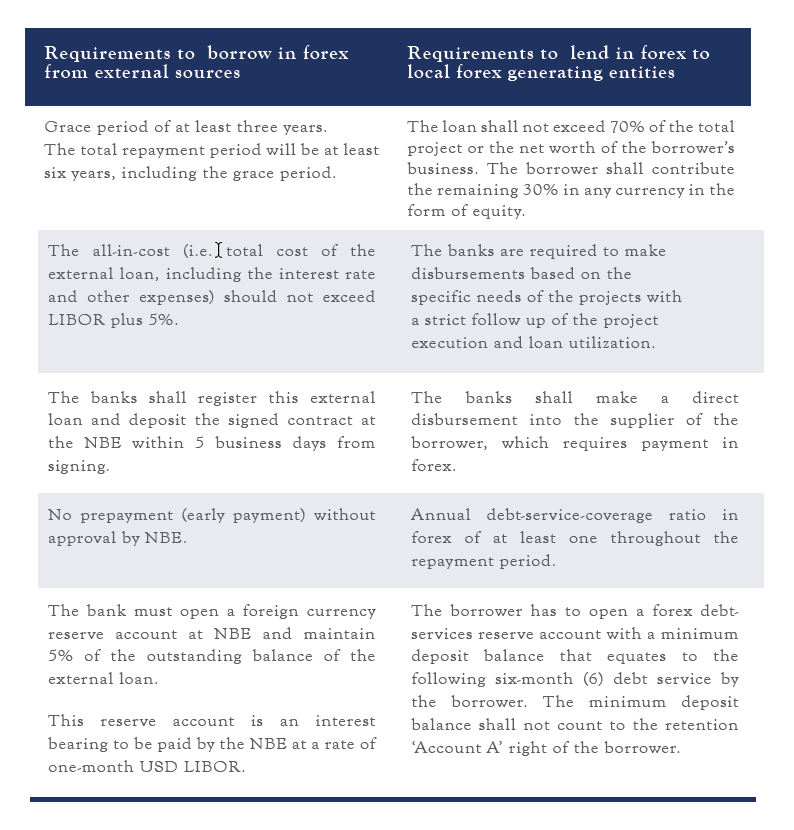 In addition to the above specific requirements, the NBE puts a very general obligation on the board of directors of the banks to develop and put in place policies and mechanisms that allows them to asses, manage and mitigate forex related risks. It lacks specific details as to the manner and process of repayment. It seems that the NBE has recognized the need for a forex but has regarded that local banks are better placed to rate the credit-worthiness of local borrowers and hence entrust them with the task of intermediating the forex lending process. Further, these banks are given a broader mandate of closely following up with forex demanding projects to the extent of being required to make direct disbursement to suppliers on behalf of the borrower.

While this directive is a positive step towards better access to forex to local business that are suffering from the dire lack of it, it is yet to be seen if such loans are going to be accessible and address the underlying problem facing the many local businesses.

As part of its mandate and effort to ensure the efficient and proper allocation of the scare resource of forex, it has been issuing directives that regulate the allocation and utilization of forex. Effective from October 5 2020, a new directive is issued replacing the one from July 2019 (Transparency in Foreign Currency Allocation and Foreign Exchange Management Directive No. FXD/67/2020).

This new directive has introduced few important changes. Fuel used to be a first-priority item along with medicine and laboratory reagents. Under the new directive, fuel is removed from all of the three-priority categories. The other significant change with direct implication to foreign investments is the relegation of the repatriation of profit and dividends to third-priority category. Previously, such items were under second priority list along with inputs for agriculture and manufacturing. This push to third-category coupled with the first-come-first served rule of the directive will further prolong the repatriation of profits and dividends.

While the new directive maintains the requirement that demands banks to apportion at least 50% of their total foreign currency allocations for the import of the priority items, it introduces additional obligation that 10% of the total allocated value to be distributed to first-priority items of pharmaceuticals while the second and the third categories will receive 45% each.

Other forex payments such as invisible payments (like commissioning, consultancy & royalty fees), external debt repayments; payment of Supplier’s Credit and salary of expat employees continue to be granted on demand without being subjected to the priority categorization and the need for registration requirements.

Another notable change is the restriction put on the discretion of the Governor and Vice- Governors of the banks to grant special priority approval, which is now limited to requests from financial institutions, the federal and regional governments, and city administrations on a case-by-case basis.

The most widely publicized new measure by the NBE is the introduction of new currency notes on September 14, 2020. The measure replaced the Birr notes of 10, 50 and 100 and introduced a Birr 200 note, which did not exist before. These new notes have already began circulating in the market replacing the old ones and will continue for the coming three months from its introduction. It has been reported that the currency change is aimed at gathering currency circulating informally and outside of financial institutions; curb corruption and contraband; and support financial institutions confront currency shortages.

Any transaction beyond the above-set limits can be made with payments from account to account transfers, with cheque payments, CPOs or other forms of payment systems. The Presidents (CEOs) of the commercial banks may approve cash withdrawal in excess of the limit under exceptional cases, using a criteria approved by the NBE. Any financial institution, which breaches these cash withdrawal limits is subject to a fine. It is now being reported that the limitation on cash withdrawal is fully removed for certain entities such as government institutions, charity organizations, embassies and credit cooperatives. Related with these measures, the Federal Documents Authentication and Registration Agency (“DARA”), commencing from September 17, 2020, has put restrictions on the authentication and registration of loan agreements and sale of movables and immovable properties. DARA now requires all such transactions to be undertaken through bank-to-bank transfers, which ought to be supported by a bank transfer slip, bearing the stamp of the bank. DARA has also temporarily halted the authentication and registration of the transfer of movables and immovable properties through donations/gifts.

1 This is as per the latest information we have gathered as of the date of this legal update.

The information contained in this legal update is only for general information purposes. Nothing herein shall be considered and relied upon as a legal advice or a substitute thereto.